Impact of texting on enrollment

There’s a clear correlation between admissions reps who are texting students and those who are meeting - and exceeding - their territory expectations.

Michael McMahon, VP Enrollment Management at the University of Mary, added Cadence to UM’s enrollment communications strategy in 2016. McMahon immediately began tracking texting data as it relates to student conversion and, ultimately, and more importantly - enrollment yield. The data didn’t let him down, serving up compelling insights about both prospective students and UM’s own admissions team.

Insight #1:
Student engagement through text is a clear indication of interest and likelihood to enroll. 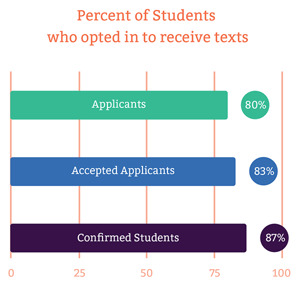 McMahon first sought out data correlations between percentages of applicants who opted-in for texting and percentages of students who were ultimately confirmed.

“Our texting data is a better form of ‘lead scoring’ than anything else money could buy.”
Michael McMahon
VP Enrollment Management
University of Mary

Yet perhaps the most remarkable insight to come out of McMahon’s analysis was that 87% of confirmed students that had opted in for texting had engaged in two-way communication with their UM Admissions rep. Furthermore, a staggering 63% of the same set of students sent three or more texts to their UM Admissions rep. Anyone tasked with one-on-one meaningful communication with prospective students will attest to both the rarity and value of that level of personal engagement.

Insight #2:
Admissions reps who lean most on texting are far exceeding territory expectations. 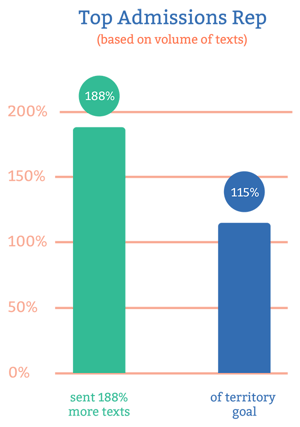 McMahon then sought out correlations between texting and the performance of his internal team, taking a look at the volume of texts sent by his reps and correlated that with territory goal. He had noticed that one rep in particular had profoundly embraced the medium and he wanted to see if that commitment was producing parallel results.

“While we are diving deeper into the data, one thing we know for sure are that Admissions Reps who work hard and embrace texting as a preferred medium have a very clear advantage over those who do not.” McMahon further explained that despite the success the University enjoying with texting, texting alone is just one part of a multi-channel communication plan.