The evolution of student communication

It is 1 million years B.C. and a primitive college admissions professional smacks a hand in a pile of clay, furiously slaps a message on a cave wall, and instructs students to enroll in Mastodon Hunting 101. Their younger counterpart casually strolls by and says, “If you’re not sending them a smoke signal, they’re never going to read it.”

This has always been the way of higher education. How you speak to students is as important as what you say, so we’ve learned and adapted. But is your communications strategy state-of-the-art, or are you still drawing antelope with mud?

Take a look at our timeline and see if you’ve “evolved.” 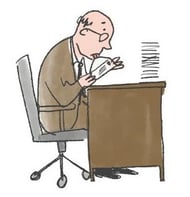 This species would have the patience to sit through an IOS update, if they had any idea what one was. Born into a world with libraries and family conversations, the Homo Enveloptus believes strongly in the power of the written word and thinks the only shortcuts you should take are across dirt paths on bicycles. If your strategy involves a stamp, start seeking endorsements on LinkedIn.

Imagine answering a phone without knowing who was on the other line. To get into the head of a species that had the ability to use their brain to remember phone numbers is to understand a true workhorse. Phone communication was fine at a time when there were only 52 TV channels and people still received their news from Pennysavers, but this species belongs behind glass, where they’ll undoubtedly thrive doing crossword puzzles and talking to bank tellers about the weather.

This species was discovered when archaeologists unearthed an AOL ‘1,000 Hours Free’ CD display at a gas station. Once on the cutting edge of communications, the majority of Emailderthals died out during the Spam plague of 1998. Emails, like a piece of sharp shale, were a useful tool to cut away fat, but they’re best cast off and replaced with a more refined instrument. Studies also show that their subspecies, ‘Emailreceiptrequestus’ quickly went extinct when abandoned by all surrounding communities. 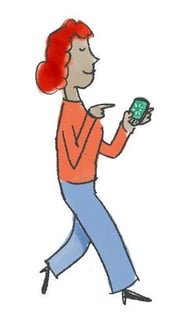 The steely eyes and straight spine of the Texto Sapien are truly a wonder of evolution. Able to “BRB” friends at a Chipotle while tapping out a semester schedule, this species rules the food chain, as long as said chain is gluten-free. The best way to connect with a Texto Sapien is succinctly. They have no time for subject lines, salutations or small talk. If you’ve got something to say, shut up. Just text it. If you’re not on the same level as the Texto Sapien, you may as well be buried amongst your terracotta army.

The age of texting is here. With Cadence, your campus can create instant, meaningful connections with students.